Meet Caroline Herewini. Come listen to her story on March 16 at the United Nations Commission on the Status of Women. For more event information see the card below.

Caroline Herewini is the Kaiwhakahaere (Chief Executive) of Te Whare Tiaki Wahine Refuge based in Porirua, Wellington New Zealand.  She is passionate about the Human Rights of ALL women, children, their families & whanau to lead violence free lives.
.
Based in Porirua City; Caroline has been the driving force behind the establishment and on-going operation of Te Whare Tiaki Wahine Refuge Charitable Trust. – An Indigenous (people of the land) service underpinned by “Te Tiriti o Waitangi” (The Treaty of Waitangi) Principles; obligations, roles and responsibilities in regards to Protection, Participation & Partnership, in reference to All women, children, families visitors/guests in our land.

Caroline has spent the last 18 years working tirelessly on the ground for Women’s Refuge in New Zealand and has presented at National and International events including Mexico, Washington DC, Canada and Australia in regards to “Impacts of Domestic Violence and Indigenous Rituals of Engagement’. Caroline has attended Three Pacific Watch New Zealand delegations to the United Nations Convention Status of Women in 2013, 2014 & 2015, is a member of The Every woman, Everywhere Coalition; works globally to advance a grassroots-driven international treaty to end all forms of violence, & is a delegate & founding member of International Network to End Violence Against Women and girls (INEVAW).  This network aims to build voice, create space and ensure representation of women from particularly developing countries and to use this to advocate for the full eradication of all forms of gender based violence.  Caroline is a Human’s Rights & Social Justice Adocate and remains committed to ending all forms of Violence Against Women & Children in Aotearoa, New Zealand. 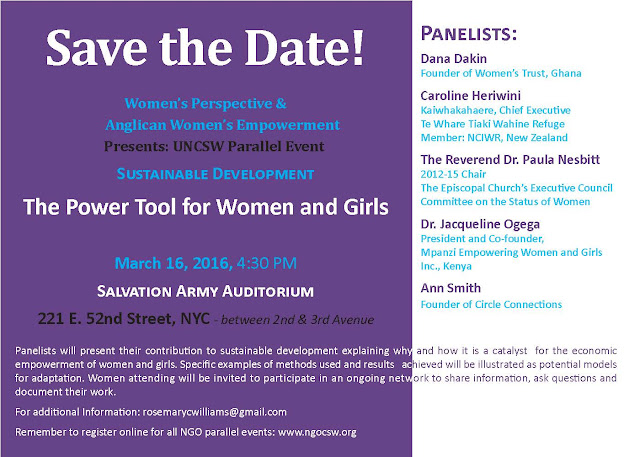 Posted by Rosemary Williams at 6:28 AM