Finding Your Assignment
and Moving Towards your Circle!

Our Currency of the Heart story is about Jean Shinoda Bolen, author, Jungian analyst and activist. Jean spends much of her currency of the heart as an advocate for a fifth UN sponsored world conference on women (5WCW). Next week she will speak in New York, at parallel events of the 57th United Nations Commission on the Status of Women. More than 5,000 women from many countries of the world have registered and will participate.
"Moving Towards the Millionth Circle: Energizing the Global Women's Movement", Jean's new book, is an invitation to advocacy and action. This book will be given as a gift to many at the conference by Jean and her publisher Conari Press.Introducing you to my dear friend Jean Bolen is a delight. Jean is one of the most hopeful and inspiring people I know. She speaks often about "assignments" and seems certain about hers. Watching her tend to her assignment gives me the courage and determination to tend to mine which is sharing stories of Currency of the Heart.


"A friend is someone who remembers the song in
your heart and reminds you of it when you have forgotten."
Kenyan Proverb

Jean Bolen is this kind of friend.  Here in her own words is her story.

I continue to take my “assignment” as a message carrier to heart. I believe that critical-mass, grassroots activism transforms consciousness which in turn, changes history. I believe that humanity is at a crossroads and that what women do in the next few decades will determine the fate of life on this beautiful, abundant planet.

I’m an advocate for a UN sponsored 5th World Conference on Women (5WCW) as a rallying point that would raise consciousness, network women worldwide and at a time of transition, could be the tipping point

Activism and individuation (to find a meaningful, inner directed, chosen life-path) come together when the choices we make express who we are. There is a soul purpose to life. Be centered, and archetypes, dreams and synchronicities provide depth and direction. As one phase of life shifts into the next, energy becomes free to take on something that is personally meaningful, fun, creative and motivated by love—my definition of “assignment.”

The author copies of Moving Toward the Millionth Circle were delivered on January 21, 2013, Inauguration and Martin Luther King Day!  Such an auspicious beginning and such a delight to hold the little book in my hands. In this author-mother’s eyes: she is gorgeous! My publisher provided 2000 copies to give away at the UN during the CSW meetings. They will be given to NGO delegates by other delegates who volunteered to help gift the books in one-to-one conversations. A random method that invites synchronicity. After March 1, the book will be released for sale through amazon.com.

I wrote this sister book/sequel to The Millionth Circle: How to Change Ourselves and The World for heart centered activists who are motivated to act by compassionate action, a sense of sisterhood, or fierce mother bear protectiveness which is a combination of love and outrage. I wrote it when efforts for a 5th World Conference on Women (5WCW) encountered obstacles and resistance even after the UN Secretary General and President of the General Assembly issued a joint statement in strong support on International Women's Day, 2012, and I turned to writing as an expression of my activism. The last UN women's conference was in Beijing in 1995 --before widespread use of the internet, way before the millennial generation entered adulthood.

I wrote it to inspire you to act out of consciousness and choice to step up and take on what is meaningful, fun--even when difficult, and motivated by love, which only you can know to be true. Activism is then an individuation step and soul work. I wrote it so more circles with a sacred center would form and groups in existence might transform into circles. I wrote it with the hope and intention that it would be in print when the UN Commission on the Status of Women met the first two weeks of March 2013 and that I could gift copies of the book away to NGO delegates and UN people. This became possible because of exceptional support from my publisher (Conari). Synchronicity, serendipity and grace helped all along the way.


I wish now that I had included how an idea spreads geometrically with the example of the 3 to the 19th power (it is in the Preface to the paperback of Urgent Message From Mother: Gather the Women, Save the World.)  If three women speak of something each believes is true to 3 others, and they in turn speak to 3 others, in 19 steps the message will reach 1,162,261,487. When a critical number of people change beliefs in what is possible, then perceptions and actions follow.  This Inauguration Day was a reminder.  Remember history? Slavery and denying women the right to vote was once what was. These expressions of patriarchy were transformed. Compassion and courage grow in a circle of equals with a spiritual center--as members of AA know. In the consciousness-raising groups that became the Women’s Movement in the 1970s, equality was a sacred mission.

I believe that the feminine principle is rising into consciousness through women and exceptional men and that the fate of planet and humanity depends upon each of us believing in the possibility of transformative change in our families, communities, institutions, countries, and the world. To believe leads to action which changes us as well what we want to change--when done with love, hope, perseverance, courage and optimism

Activism is a personal choice. It is a passion for a cause expressed


through actions, funding, communication, as well as prayer, rituals, and art.

The written words to "Untapped Source of Peace can be found on
Jean's website http://www.jeanbolen.com/ 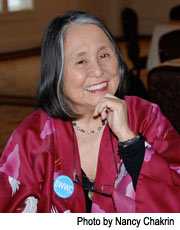 Jean Shinoda Bolen, M. D,Jean Shinoda Bolen, M. D, is a psychiatrist, Jungian analyst, and an internationally known author and speaker. She is the author of The Tao of Psychology, Goddesses in Everywoman, Gods in Everyman, Ring of Power, Crossing to Avalon, Close to the Bone, The Millionth Circle, Goddesses in Older Women, Crones Don't Whine, Urgent Message from Mother, and Like a Tree with over eighty foreign translations. She is a Distinguished Life Fellow of the American Psychiatric Association and a former clinical professor of psychiatry at the University of California at San Francisco, a past board member of the Ms. Foundation for Women and the International Transpersonal Association. She was a recipient of the Institute for Health and Healing's "Pioneers in Art, Science, and the Soul of Healing Award", and is a Diplomate of the American Board of Psychiatry and Neurology. She was in two acclaimed documentaries, the Academy-Award winning anti-nuclear proliferation film Women—For America, For the World, and the Canadian Film Board's Goddess Remembered. The Millionth Circle Initiative (www.millionthcircle.org) was inspired by her book and led to her involvement at the UN. She is the initiator and the leading advocate for a UN 5th World Conference on Women (www.5wcw.org), which was supported by the Secretary General and the President of the General Assembly on March 8, 2012.

Posted by Rosemary Williams at 8:53 PM